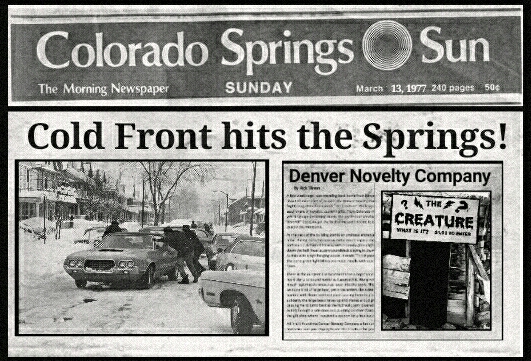 A few weeks ago I was traveling home from Kansas when I came upon a strange little attraction about 30 miles east of Denver. A giant stone cowboy welcomes weary travelers  criss crossing  along I-70. The Denver Novelty Company is a gas station/ souvenir shop, with a most frightening attraction named “The Creature” Walking into the main building I am confronted with an assortment of novelty, souvenir gifts. From Colorado mugs to gag items. The interior is plastered with weird signage beckoning one to the mysterious creature. One states “An atomic abomination from beyond!” Curiosity got the best of me and I decide to pay the one dollar admission fee to see what exactly this monster is.

At the back of the building stands an ominous entrance, something resembling the opening to an old mine. Pulling open the narrow metal door I begin a short climb down a dark, steel stairwell. At the bottom is a darkened hallway with a spooky green light emanating from the other side. Once I started down the hall I hear a scary soundtrack playing in the next room. Turning the corner I see a large black curtain with a sign hanging above. It reads “This is your last chance to turn back! Proceed at your peril!”. The eerie green light blinks overhead. Finally with steely resolve I pull the curtain back and enter the room.

There in the dungeon like basement I see a large, concrete tomb like structure on the other side. My heart starts to pound harder as I approach it. Along with the spooky soundtrack of ghostly wails, I find myself legitimately uneasy as I peer into the tomb. The thing inside is difficult to describe. It appears to be some kind of large bear, yet it has antlers like a deer and it’s large sharp teeth and eyes have been painted with fluorescent red paint causing them to glow brightly under the black light. Then quite suddenly the large beast raises up and makes a loud growling noise. This startled me quite effectively, causing me to jump back as the hydraulic arm lowered the creature back into the tomb. After this I exited through a side door and climbing another staircase I found myself coming out on the other side of the gift shop where I received a coupon for a free ice cream cone.All in all I found the Denver Novelty Company a fun surprise when traveling along highways and byways and make sure you stop by to see The Creature for yourself.